12 Factors That Can Increase Your Auto Insurance Rates

12 Factors That Can Increase Your Auto Insurance Rates
You are paying one amount for your car insurance policy. Your spouse, on the other hand, is remitting a completely different amount to the same provider.

Well, this may not be an uncommon scenario. As a matter of fact, it’s quite prevalent especially among couples using different car makes.

But here’s the problem. You have different rates yet you both use the same vehicle model.

And just when you thought the situation couldn’t be stranger, you learn that your neighbor’s premiums are half yours.

You’re pretty much within the same age group, and your vehicles are similar. You’ve even confused their vehicle for yours on several occasions. 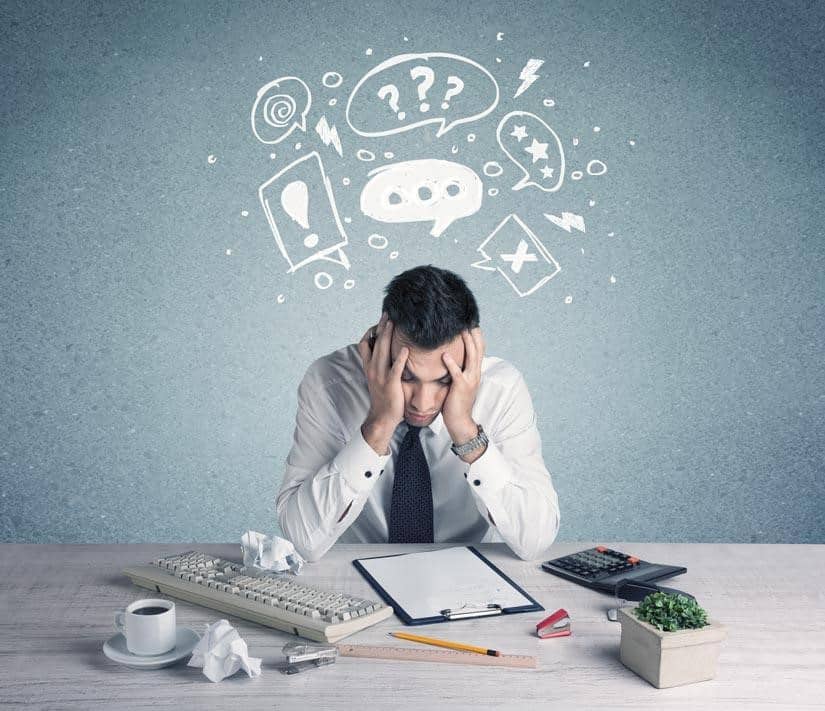 Last time you checked, there was no state boundary between you and the neighbor. You both live in the same locality, under the same federal and  state insurance legislation.

So, what could be the problem? Why are your car insurance rates significantly higher?

To get to the bottom of this, let’s first establish where it all begins. With actuaries.

How Car Insurance Rates Are Determined

Actuaries are at the center of the insurance industry. Insurance providers even need them way more than sales agents and customer service agents.

All because of one simple fact. They are literally the principal determinants of profits their employers stand to make.

As you drive your car around, actuaries are busy seeking all the statistical nuances that predict the likelihood of you filing a claim in future.

To be fair, you may not have any plans to file a claim. But actuaries have a rough idea of when you’ll probably do it.

This data is subsequently extrapolated and used to determine your overall car insurance rates. The greater your chances of filing a claim, the higher your car insurance premiums will be.

Additionally, the more the money the insurance company stands to lose when compensating you, the greater their efforts of protecting themselves with high rates.

Some of the criteria used for this assessment may be quite obvious and widely acceptable. Others, unfortunately, are rather surprising and quite controversial.

Many industry experts argue that they may not directly reflect risk levels on individual car owners.

At the moment, these pricing variables are pretty standard across the industry. However, each insurance provider is using a unique formula to calculate their customer’s risk levels.

As a result, rates may differ by hundreds or even thousands of dollars.
Take a look at the average rates in selected Texas companies, for example. While you could pay $2,330 in one company, you stand to save almost half of that by simply switching to a different provider.

Unfortunately, most car owners don’t bother comparing the numbers, even when their rates keep rising.

According to consumer research firm J.D Power, the rate of reviewing pricing across different insurers is in fact dropping.

In 2015 for instance, there were 39 shops per 100 car insurance policies. Compare that to 2016, when only 33 per 100 car owners shopped for alternative cheaper policies.

Well, of course, 33% may seem like a solid number to most people. Sadly, most of these shoppers don’t follow through the entire process. They only check out offers by different companies, then leave it at that.

Only 30% of car owners who engage in shopping eventually switch to cheaper insurers.

That leaves out a significant majority who don’t know why they are paying dearly for something as simple as car insurance.

To help you comprehensively compare variables and rates by different insurance companies, we’ll explore critical factors that can increase your auto insurance rates. This will consequently help you minimize your premiums, and make informed decisions when shopping for cheaper providers.

Credit score is by far one of the most controversial risk assessment factors. A poor score could potentially increase your car insurance premiums.

Maintaining a good one, on the other hand, could cumulatively save you thousands of dollars.

Some drivers and industry experts argue that an individual’s past financial decisions and driving habits are not correlational.

Insurance companies, on the contrary, feel that drivers with poor credit scores tend to file more claims than their counterparts.

And in most instances, they demand more compensation compared to claimants with good credit scores.

According to a  survey by Conning & Co, only 92% of insurers are using this to assess their clients’ premiums.

You are particularly lucky if you’re insured in Massachusetts, Hawaii or California since the practice is prohibited in these states. 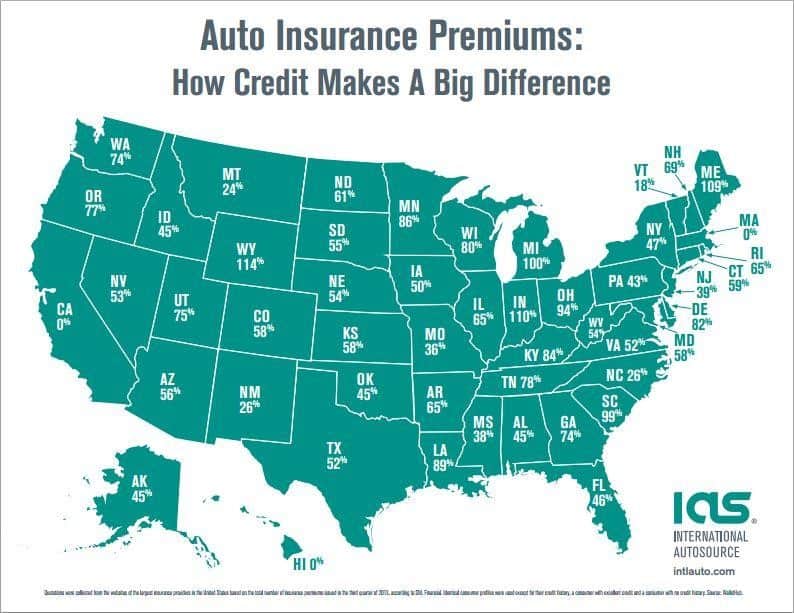 If you’re a man, expect to be slapped with substantially higher premiums than your wife

Going by a CBS News post, women pay $15,000 less for their auto insurance in their lifetimes compared to men.

No, it’s not because women are exceptionally good drivers

The debate on the connection between driving skills and gender aside, accident statistics show that men are more likely to crash.

Since motoring begun in the U.S, the bulk majority of accident victims are always male. That’s because men, especially young drivers, engage in riskier behaviors.

If you need proof, take a look at individuals arrested for failing to wear seatbelts, driving while intoxicated, and speeding.

Most of them are male. And that’s why consequent crashes are usually more severe than cases involving female drivers. 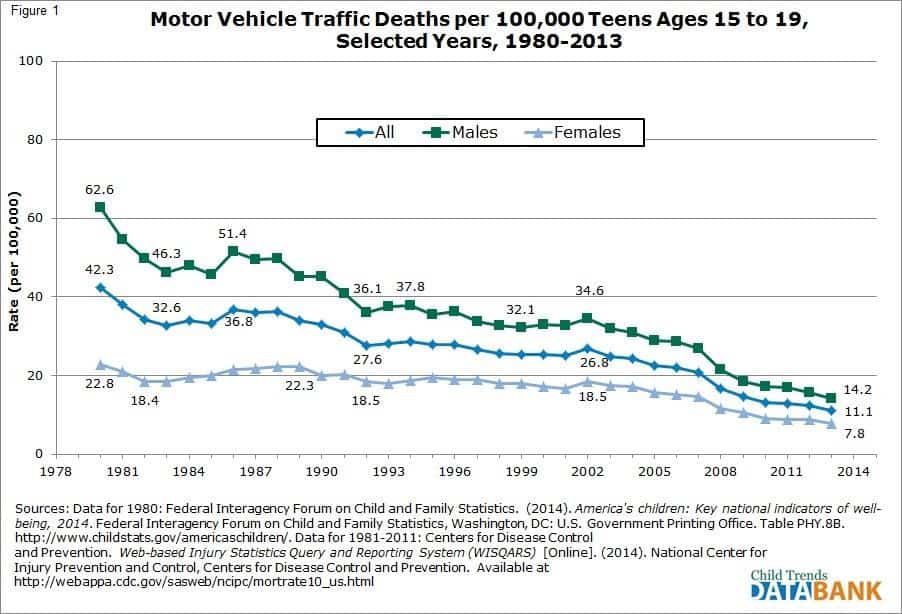 On the bright side, this criterion is not applied in all states. Male drivers in Pennsylvania, North Carolina, Montana, Michigan, Massachusetts, and Hawaii are exempted from gender-specific rates.

The risk of a potential accident is the fundamental reason why drivers insure their vehicles. Insurance companies are meant to protect individuals from possible resultant liabilities.

Ironically, a car accident is the last thing you need when you have an auto insurance cover.

Of course, you’ll gladly file a claim, and even enjoy the subsequent payout.

But tables ultimately turn in favor of the insurance provider once the dust settles.

The company will combine findings from independent and police investigations to establish new premium rates.

Sadly, your rates could be bumped up even if the accident was caused by a third party.

4. Professions That Require Significant Time on The Road

It’s no secret that the biggest chunk of an individual’s adult life is spent at their workplace.

Insurance providers know this all too well. So they also consider profession and corresponding work activities in the overall risk assessment process.

If you’re a pilot, for instance, you stand to benefit from comparatively low premiums.

Other careers that involve extensive movements- like journalists and delivery driving- translate to higher insurance premiums.

While vehicular traffic is not often experienced pilots, it’s an integral part of the regular operations handled by journalists and delivery drivers.

So the resultant vehicle mileage translates to a considerably high risk of accidents. And that, to insurance companies, is interpreted as increased premiums.

Driving is exceptionally exciting and fulfilling to young drivers who are starting out. But insurance companies don’t share these sentiments.

Essentially, the younger the drivers who are handling your vehicle, the higher your premiums will be.

According to the Insurance Institute for Highway Safety, young novice drivers are the riskiest people to insure.

They frequently make wrong decisions on the road, are easily distracted, and often immature.

Going by this, the highest rates are applicable to teenagers. They can potentially drop by 20% at age 25, then progressively decline through 30 all the way to 60 years old.

Thanks to statistics that have proven reduced crash risk, drivers between 30 and 60 continue to enjoy the lowest rates.

Marriage, according to some sociologists, is not just a status change. It also affects your overall perception of life.

Married couples have been found to be more considerate and calculative than their single counterparts.

They are subsequently less likely to engage in risky driving than their single counterparts.

The National Institute of Health conducted an analysis on this and established that single drivers are twice as likely to be involved in motor accidents.

Consequently, a bachelor or spinster status could land you  2-25% higher premiums than married couples.

Essentially, the younger you are, the bigger the difference gap. 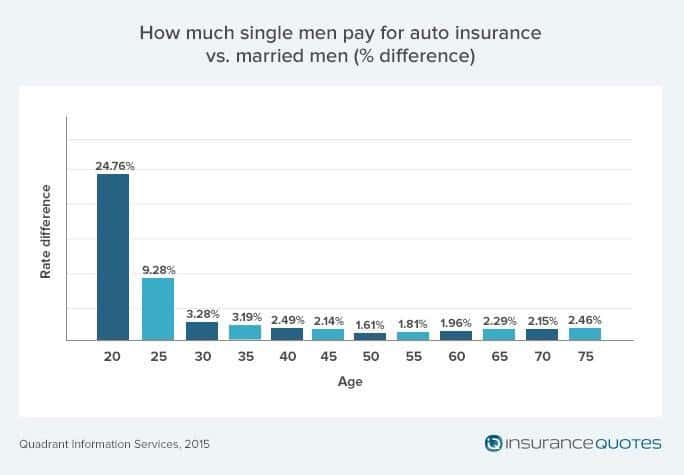 On the bright side, it’s not all bad news, at least for single people in Massachusetts. It’s the only state with legislation against this criterion.

Your insurance limit refers to the maximum amount your insurer will fork out in the event of a claim.

Well, all car owners wish to secure the highest amounts possible. But, on the flipside, any limit increase is proportionally reflected in the corresponding premiums.

That’s the nature of the insurance business. Your insurer cannot afford to bump up your potential payouts without revising your insurance rate upwards.

Technically, a base model Porsche Carrera should attract higher insurance rates than a four-cylinder base model Toyota Camry.

It’s more expensive and would, therefore, cost an insurance company quite a tidy sum to replace.

Pretty much what you’d expect. But things take a rather interesting turn when you switch to the six-cylinder Camry.

Compared to the Carrera, that specific Camry may be cheaper to acquire at the beginning. But subsequent insurance rates would ultimately be costlier..

Essentially, the bigger your engine, the more the horsepower your car will generate. And that, even to a motoring beginner, means increased speeds.

This is one area that insurers are progressively benefiting from police work on the roads.

Records of all drivers and their traffic violations are readily available in the  Central Violations Bureau and the National Driver Register.

Even the slightest offenses are picked up by your insurance company and could trigger a revision of the rates.

Most of the minor violations are often inconsequential because most providers usually work with lenient frequency rates.

Major offenses on the other hand, like DUI, reflect poorly on your driving record.

If you’re lucky enough to retain your license, expect major changes to your overall premiums.

Your insurance company probably knows more about your neighborhood than you do.

So if you live in one, you might want to move out. If not, prepare your pockets for significantly higher premium rates.

Car insurance policies are usually made up of multiple coverages, for different risk factors.

State legislation only requires drivers to purchase the most critical ones. And that leaves you with the liberty to acquire as many as you can.

However, each additional coverage is reflected in your overall premiums.

The more you cover your potential liabilities, the more you should expect to pay your insurance provider.

Unless it’s parked poorly, a stationary vehicle is less likely to cause an accident.

The only risk factors would be theft, extreme weather, and third party damage. And that would probably qualify for very low insurance rates.

But, of course, it’s impossible to park your car forever – You have to use it.

And the farther you go, the more the risk factors you’ll come across.

Each car and new obstacle you meet on the road is pretty much considered a risk.

To proportionally quantify this, insurance companies periodically review odometer mileage.
The more you use your car, the higher your annual mileage.

So it only makes sense to apply the highest premiums on cars with comparatively high mileage.

Going by this list, what do you think would be your best strategy for minimizing current auto-insurance rates?