Business insurance is going up and we are here to explain why and potentially how much.
“Wait till  legislation lands on insurance companies and the market will turn”

These have been sentiments on one side of the spectrum for quite some time now.

We all know commercial auto insurance policies have been steadily climbing for a couple of years. And sadly, the trend doesn’t seem to be slowing down.

Since consumers have been complaining, insurance providers must be having a ball, right? Indications show that they are possibly laughing all the way to the bank.

After all, we haven’t seen many claims lately, right?
Interestingly, sentiments have been the same for commercial insurance providers. They are also complaining about current premium rates.

According to a report released by Fitch Ratings Inc, the  commercial auto sector has been recording losses since 2010.

2016 was particularly poor, with the worst underwriting performance since 2001. Evidently, insurance companies are not doing as well as we thought

While we acknowledge that the bulk of providers have recorded losses, we can’t deny one simple fact. Commercial vehicles are progressively becoming safer.

That is the bottom line. Elemental improvements like lap belts, padded dashboards, and breakaway steering wheels paved the way for advanced safety features.

As a matter of fact, according to  recent crash tests, one fleet was able to use collision-mitigation technology to reduce rear-end crashes by about 70%.

Additionally, they established that the tech further minimized the severity of the remaining 30% of crashes. 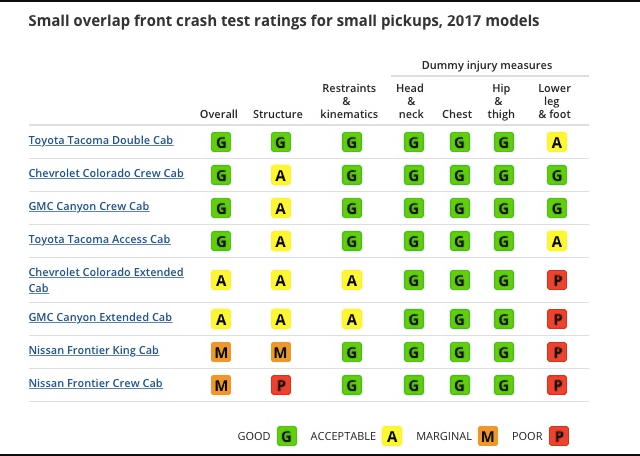 Well, of course, these commercial vehicles may still not be accident-proof, but crash tests have proven that they are indeed safer.

And since insurance providers have always kept a close eye to such developments, consumers continue to expect substantially lower pricing.

All things considered, there seems to be a disconnect. Commercial vehicles are now safer than ever before. But insurance pricing is still rising owing to increased losses by providers.

So, will this continue in 2018? Or will developing trends, coupled with evolving legislations make commercial insurance cheaper?
To demystify this whole issue, let’s look at the current position of the industry. Then subsequently establish factors that will be affecting pricing in 2018.

The 20th Century saw increased development of road networks and overall infrastructure in the U.S.

The last quarter was particularly interesting, as it started a transportation trend that persisted for a couple of years.

Consequently, the number of miles traveled kept rising every year until 2008.

Then the great recession came with a wide range of consequences, among them reduced travel.

With funds not readily available in the economy, commercial trucks were not moving around as they previously did.

And this outlasted the recession until 2012 when mileage started rising again.

The growth has been exponential since then, and it’s seemingly not slowing down anytime soon.

In 2016 alone, Americans drove a total of 3.1 trillion miles thanks to gas prices decrease and improved economy.

Commercial vehicles continue to contribute substantially to these figures.

Under normal circumstances, an average commercial driver moves around way more than his private counterpart.

Now review that from a provider’s perspective. More mileage translates to increased risk of accidents and mechanical failure.

Eventually, they end up offsetting this by periodically revising and increasing standard commercial premiums.

But, look at the bottom line again – With mileage still rising, it’s expected that the number of accidents will record a similar trend.

Additionally, even with current traffic legislation, Americans have never been known to be the most careful drivers.

True to this, accident frequency is currently at its highest in the U.S. In 2015 alone, there were 4,311 large trucks and bus accidents across the country.

Compared to previous years, that translates to 26% increase since 2009.

Now let’s analyze that against miles traveled. From 2014 to 2015, the number of accident fatalities per 100 million miles traveled by buses and large trucks increased by 1.7%.

It’s evident that an increase in mileage translates to a corresponding growth in the number of accidents and deaths.

All things considered- administrative expenses, property damage, medical expenses, and losses in productivity and corresponding wages- the cost of auto accidents in 2016 was $432 million.

While fatalities rose by 6% compared to the previous year, financial losses marked a double increase of 12%.

Of course, such a trend never goes down well with insurance companies. And that’s one more reason why 2017 saw an increase in auto insurance premiums across the board.

But despite that, commercial auto insurance providers have hit depths the industry hasn’t experienced in 15 years.

When the industry thought things couldn’t get worse, 2016 was marked by an even lower underwriting performance.

So, considering how recent years have gone down, can we expect a bright spot for both commercial insurance providers and consumers in 2018?

Yeah, of course, insurance providers like to market themselves as “protectors” of liabilities.

They always seem like they are willing to sacrifice their resources for your benefit.

But, at the end of the day, they are all businesses, not charities. And the principle mantra for any business is profits.

So, unless commercial vehicles drastically reduce their travel distances and maniac drivers suddenly reform, expect to pay a little more for your commercial auto insurance over the next 12 months.

The rates all through 2018 will be determined the recent proportions of expense to revenue, commonly referred to a “combined loss ratio”. Usually, it’s all good for a company until the ratio hits 100%.

At that stage, the insurance provider is breaking even. Anything above that, therefore, signifies losses.

The company is essentially losing way more than it’s making from the premiums paid. 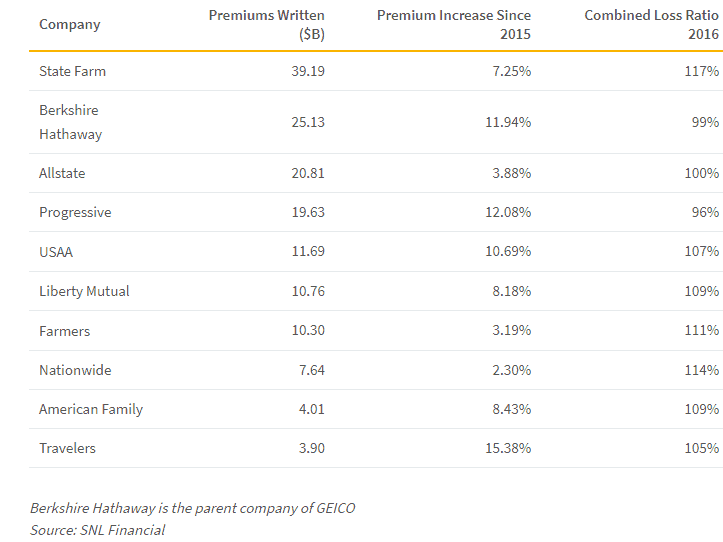 Now, please note that these are supposed to be the crème de la crème of insurance businesses.

It’s where you’d most probably place your money if you thought about investing in auto insurance.

Going by past trends, they are the most profitable in this sector.

But, surprisingly, only two of them made a profit in 2016- and just barely. Cumulatively, they all add up to an  average compressed loss ratio of 107.1%.

Makes you wonder where other smaller companies lie. That’s really bad not just for auto insurance providers, but also consumers- including commercial clients.

Some people have argued that they should recover by only penalizing commercial drivers who’ve been in accidents in the past.

Unfortunately, it’s not that simple. The situation is so dire that your rates will still go up even if you’ve never actually been a mile away from an accident.

That’s the only way they’ll be able to progressively bring their ratio back below 100%.

If the current situation was anything like how it was back in 2010, we’d be dealing with different projections. 2010 was the exact opposite.
8 of the leading auto insurance companies were operating within comfortable profit margins.

Only 2 of them recorded combined loss ratios of over 100%, consequently marking an average of 99.7%.

Auto-insurance companies, including commercial providers, have been recording losses for the past six years. Even more surprisingly, they’ve lost more money every time they review their rates against losses.

That said, 2018 will see commercial insurance providers not just bump their premiums up.

They’ll possibly do so with the highest margin yet. Only the long-term future could be holding promising prospects for commercial auto insurance clients.

Expert projections on patterns are still a bit sketchy.

The price of oil could continue falling as more people switch to electronic commercial vehicles. The latter is especially expected to be significantly cheaper to acquire and maintain.

Over time, that translates to more commercial drivers and higher chances of accidents. As we’ve seen in the past, this could negatively affect commercial insurance pricing.

On the bright side, however, there is little doubt that the adoption of autonomous vehicles will gradually reduce the average premiums.

According to research by Stevens Institute of Technology in collaboration with Accenture, almost 10% of U.S registered vehicles will be fully autonomous by 2035.

The rest, of course, will mostly be semi-autonomous, with advanced safety features. Even the heaviest commercial vehicles will have short braking distances, and crash-avoidance artificial intelligence.

Since as many as 95% of traffic accidents are attributed to human error, such trends could trigger a major shift in the entire auto industry.

The severity of accidents will also drop, and competition between insurance providers will peak as numbers of specialized companies rise.

Ultimately, we may see a significant drop in commercial premiums, as companies begin adjusting them according to actual risks.

As a matter of fact, this may start happening as soon as 2026. That’s when large numbers of autonomous cars will begin hitting the streets.

● According to a report released by Fitch Ratings Inc, the commercial auto sector has been recording losses since 2010. 2016 was particularly poor, with the worst underwriting performance since 2001.

● According to recent crash tests, one fleet was able to use collision-mitigation technology to reduce rear-end crashes by about 70%. They established that the tech further minimized the severity of the remaining 30% of crashes.

● The number of miles traveled kept rising every year until 2008.

● This outlasted recession until 2012 when mileage started rising again. The growth has been exponential since then.

● With mileage still rising, it’s expected that the number of accidents will record a similar trend.

● In 2015 alone, there were 4,311 large trucks and bus accidents across the country. Compared to previous years, that translates to 26% increase since 2009.

● The situation is so dire that your rates will still go up even if you’ve never actually been in an accident.

● There is little doubt that the adoption of autonomous vehicles will gradually reduce the average premiums.

● Since as many as 95% of traffic accidents are attributed to human error, such trends could trigger a major shift in the entire auto industry.

● We may see a significant drop in commercial premiums, as companies begin adjusting them according to actual risks.

Going by these facts, what do you assume you’ll pay your commercial auto insurance provider over the next 12 months?